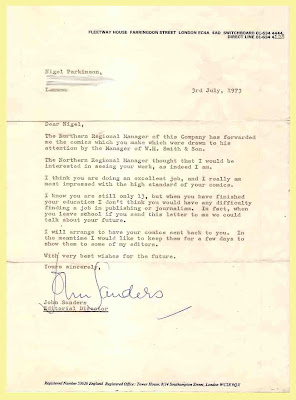 We all have to start somewhere... and we all have a stack of rejection letters... me more than most, as I kept on writing until someone, somewhere gave me a job. Here are some of my earliest...
First, left, 1973, and a letter from IPC (then publishers of Whizzer and Chips, Cor!!, Buster, etc) seemingly offering work in a few years time! exciting letter to 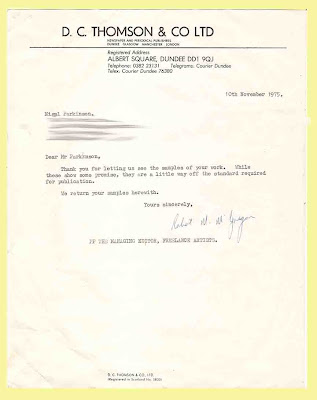 get! Of course, it was not as easy as that!


Hedging my bets, I replied to an ad in the papers asking for comic artists at DC Thomson a couple of years later. Maybe I should have told them I was 14 because this is a simple standard r 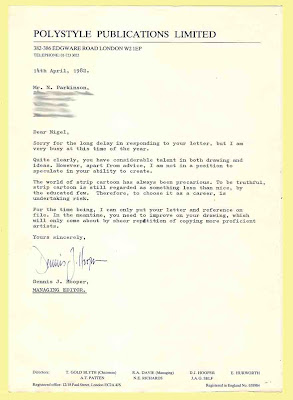 Another reject, this time from Polystyle's Dennis Hooper, responsible for TV Comic. Anyway, this time I was at least offered some constructive advice, though Dennis does remind me of the mantra I was used to hearing "...strip cartoon is still regarded as something less than nice". Still, I wasn't about to give up now!

Finally, below- a 'yes'!
Note how "colour doesn't really interest us". This was in the letterpress days of spot colour for the Beano. Only 'Plug' and 'TV Tops' of this era had four-colour printing. Anyway, the letter continued "I must say your colour pages are very good" which is nice to hear, even if they weren't interested!
Anyway, the letter ends with "if you are prepared to work hard" which is the truest thing to pass onto anyone seeking to break into comics.
Anyway, although I got work from D C Thomson the following week (!) it was a far from easy ride, and there would be many rejections in the next decade and more. 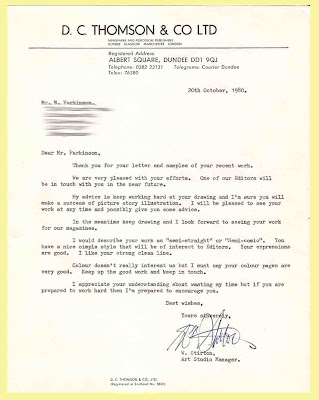 Nigel
I hadn't ever realised that Hooper was a Director of Polystyle!
Thanks for sharing.

I'm sure I also have a letter from W. Stirton - I must look it out and see what it was about.