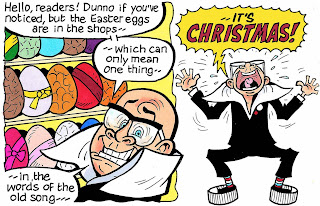 After 144 pages over the past 15 months, next week's Dandy (the bumper Christmas edition) has the very last Harry Hill's Real-life adventures in TV Land.

Now It Can Be Told, part 2:
It's been hard work, but very enjoyable. I didn't originally intend to write or co-write them all, but it ended up that way, and I must have scripted more than 100 of those pages, and worked out more from brief plots: Sean Baldwin wrote several full scripts and I adapted parts of others into different stories. Duncan Scott wrote half a dozen too. David Quantick supplied three paragraphs, each being a delicious distillation of a daft idea which I gratefully adapted into full stories. I also spoke with Al Murray, Milton Jones, Brenda Gilhoolie and others, including, would you believe it, Ray Galton and Alan Simpson (yes, really!!) who wanted to help but in the end couldn't find the right approach, so a big thank you to Sean and Duncan and David who really got the feel and came through with great ideas! Of course Harry Hill himself was very helpful, and came up with the strapline, 'Real-life Adventures in TV Land' which defined and directed the whole enterprise! He also texted me with the news that he found the first one "insane, hilarious and original" which I elected to take as a compliment.

As I'd never written anything for DC Thomson, let alone Harry Hill before, I had initially hoped someone (a writer perhaps?) would write the scripts, but after writing the first episode myself, the general consensus was that obviously a writer wasn't required as the pictures and my word balloons seemed to work out just fine. So, partly as a 'selling point' and partly to obscure the true credits in case the strips were thought a bit second rate (not having been written by a writer!), I made up the fiction that Harry Hill wrote them and I just drew them, but, dear reader, as we are now at the end of the line, I can exclusively reveal that I wrote most of them as I went along- quite literally, drawing a bit, writing the word balloon- drawing a bit more- changing what I'd done in the word balloon- and so on, until after two or three days real effort, as if by magic, out came a finished two page set. It was really was 'as if by magic' because usually I found it very very difficult to come up with an idea and make it work, let alone pepper it with jokes and such, and many times I felt like giving up, spending hours and hours trying to get one line written right. And struggling to think of a new way to get 'FIIIGGHHTT!' or 'What are the chances of that happening' into the dialogue often seemed beyond my capabilities.  Yet somehow I managed to churn out two (or four - or, on one memorable occasion, TWELVE-) pages a week. After investing so much time and energy into them, I was glad that a lot of people seemed to like them, and, although at least one odd little clique of protesters will be delighted to see the end of the strip, I know some readers will be saddened to hear it's all over.

I'd like to thank Harry for his continued enthusiasm and encouragement, and his agents, both past and present, who helped us, particularly his new agent who was very supportive and wanted to extend the franchise to other areas. And I'd like to thank Craig, the Dandy editor, for starting the whole thing off and keeping it going as long as it did.
Posted by NP at 09:15 22 comments 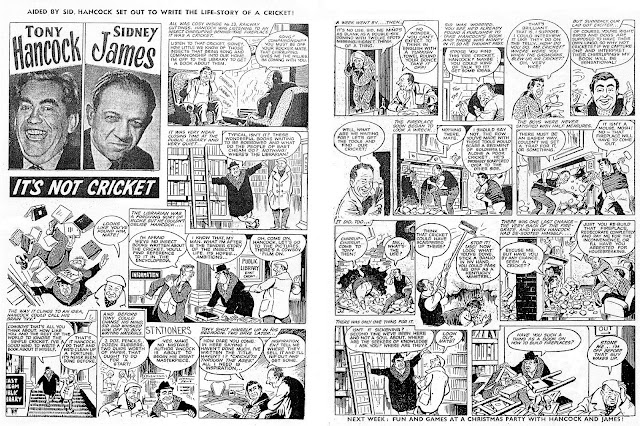 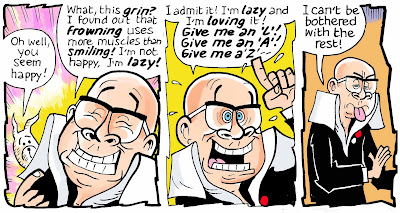 Yes, it's the next to last Harry Hill of the Year, so don't miss out! The last one is in the Christmas issue, and the next Dandy won't be out until 2012 is upon us, so do yourself a massive favour and pick up The Dandy, and see these Harry Hill escapades, brilliantly written, adequately drawn and wonderfully coloured!
Posted by NP at 13:46 4 comments