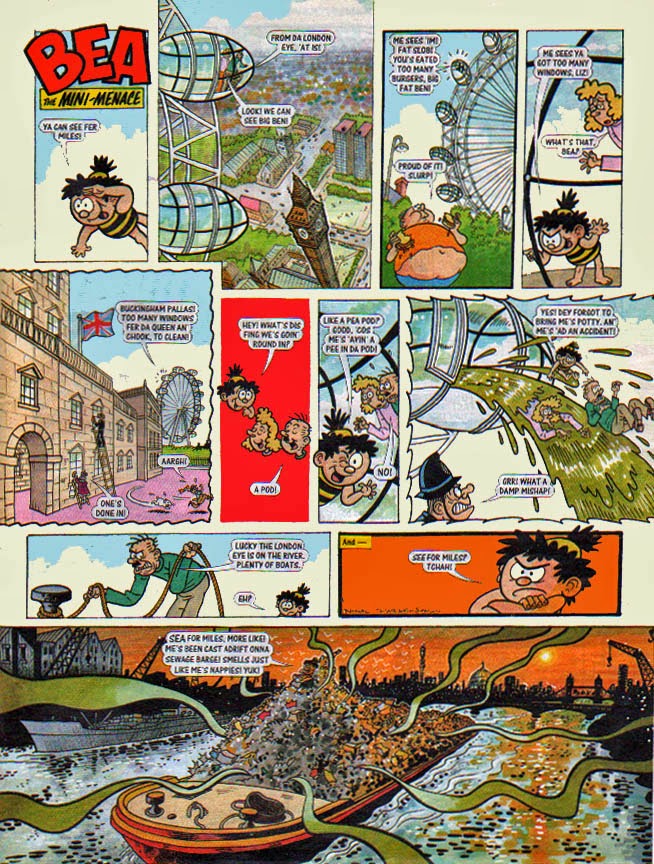 Between 1998 and 2009 I drew Bea practically every week. Recently I've been drawing her again. Here's one I drew and hand-coloured a few years ago, it's set in London, and I like the Thames barge at the end.
Posted by NP at 19:58 3 comments

One Of Those Days

Ever had one of those days?
You know the sort I mean! The sort of day you end up thinking would have been better spent asleep.
Today was one of those days for me.
Woken early by news of a relatives death, Bad start.
10 am I find out that due to a misunderstanding I would have to redraw something I spent the weekend drawing.
3pm castor on my drawing chair broke. Upon opening my pack of replacement castors I bought some time ago, I find they don't fit.
5pm, my drawing lamp broke. Just snapped off in my hand. Third lamp to do so.
Maybe it's time to go back to bed anyway.
Posted by NP at 20:20 2 comments

Untold Secrets of the Comics Biz Part 1- Being a Cartoonist 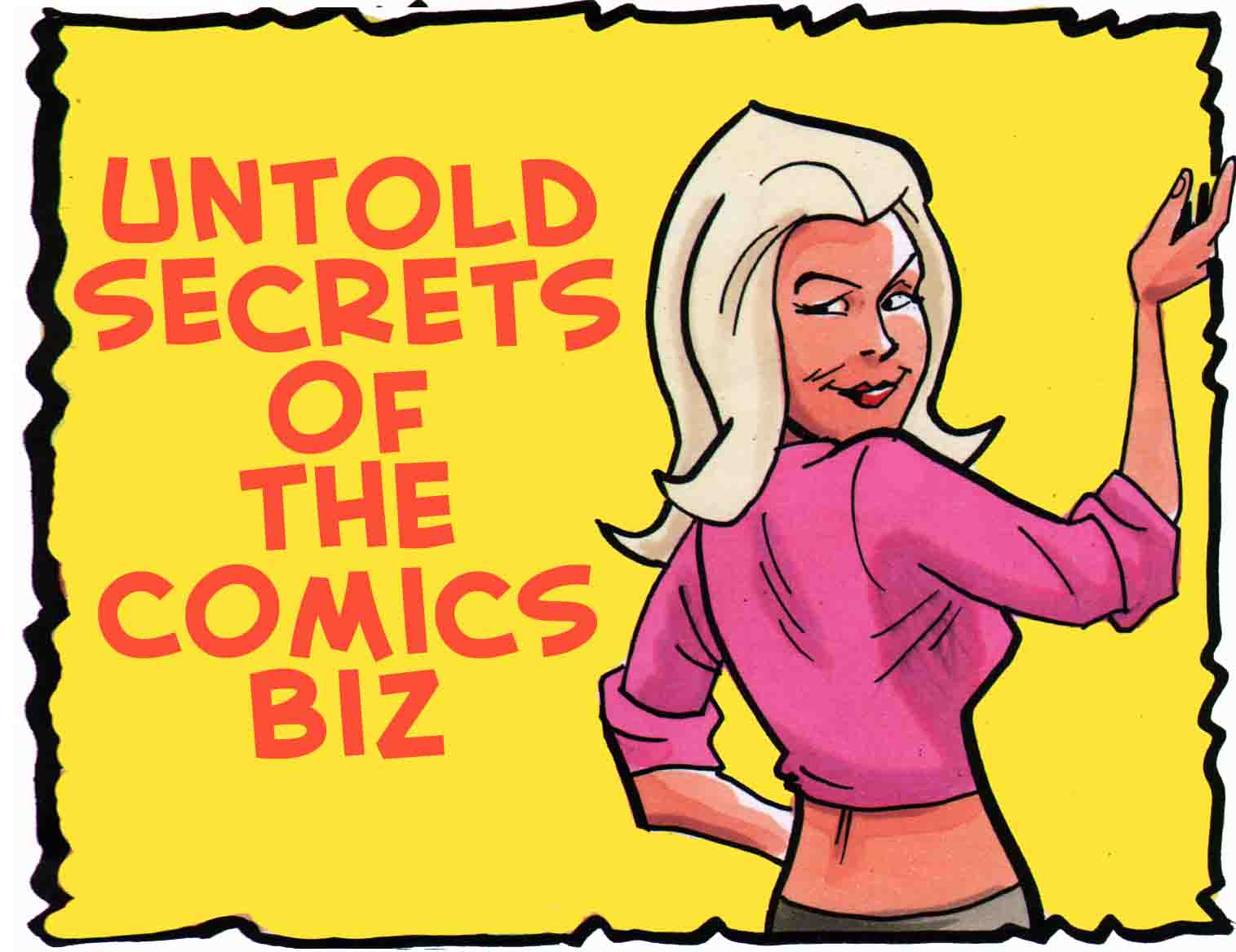 This series will generally be about specific events, people, publications, etc, but just to begin with, I want to address a matter that rarely if ever gets any attention.

Comics, eh? Reading this, you'll most likely be in one of two categories: "Comics? Love 'em!" or "Comics? Kidstuff, probably knocked off by second rate cartoonists in the morning before they go to work, maybe before they go to school".
Of course, it is possible to hold both views. A few years ago, I was at one of the scant few Comics Conventions I've ever attended 'as a Pro', sitting behind the DC Thomson stall with a Thomson's staffer, just having a chat. We'd break off to speak to anyone who stopped by and wanted to.
At one point, a youngish (at my age it's hard to judge ages, I say youngish because he looked younger than me!) chap stops by, and leans on the table.
"So, you do The Beano and Dandy, then?"
"Aye", says my colleague.
"Yeah," proceeds The Chap, "so, I'm going to LA soon to be a top comics professional with one of the top comic book companies out there, y'know, real comic books."
"Mmh?" we nodded brightly, wondering if there would be a point forthcoming any time soon.
"So, if you like, I can do some of your pages for you, y'know, I'll fit it in, make them look more professional- this sort of thing-" he idly waves a hand toward The Dandys and Beanos on the table, "is so easy to do."
"Oh aye" says my associate.
"Yeah," continues Mr Generous "And, y'know, it's not very good, I should be able to improve it a lot"
"Oh, well that's great", says the impressively impassive DCT employee, "Speak to the editor, Morris, over there- he'll be so glad you stopped by".
"Er, yeah" says the Young Hipster "Cheers, man" and he wanders, or rather swaggers confidently off.

Now, I never heard what happened to this fellow- other than he didn't help us out one bit (apologies if he's a great Marvel Penciling hero at present but somehow I doubt it) but it wasn't the last time I came across such an attitude.

I didn't say anything to our young passer-by, probably just as well- but I've thought about what he said once or twice since then.
There's a feeling out there that 'funny' comic strips are 'easy' to do, that they somehow fall unbidden from the pen in a torrent of barely containable mediocrity, that once you've drawn episode one, the others, barely indistinguishable from the first, are basically like signing your name, but that isn't the case. Some cartoonists have had a period of what one might call 'cartoonists block', akin to writer's block, where nothing comes out (or nothing printable). The most notable example was the late Ken Reid who, as most of the "Comics? Love 'em!" crowd will know, had a long fight against a sort of depression that was entirely work related. Leo Baxendale, who anyone that has read this blog for more than six minutes will know, is a force of nature as much as a cartoonist, even had a similar though less difficult time.


Other cartoonists have had the same sort of experience, where drawing became a chore, where the effort was so great it became something to be avoided. Some have been told it was depression, and it may have been, but I feel it's more pressure. Pressure and stress. Both of which are needed to pursue a career, but which if pushed too relentlessly, can lead to depression, and on the way there, they stop you enjoying what you do. And a cartoonist has to enjoy what they do, or else why would they do it? Now, a professional cartoonist could find themselves faced with a bit of a problem if they got to that point, because, whether they enjoy it or not, they HAVE to draw- it's their job- so 'not feeling like it today' isn't an option.
It doesn't end there- once a cartoonist has drawn a good piece of work, they have to do the same thing all over again the very next week.
Of course, that's the nature of any job; you have to do it week in week out.
If you're an artist ( I mean like a sculptor or a painter) or a poet or a songwriter or some other creative type, you do a project, you put everything you have into it- then, relax and enjoy the benefits of having accomplished something. For the successful cartoonist, instead of a rest, they have to go and do it again next week.
Or rather, they have to try to not only do it again but also a bit better. That's a continual pressure, and it generally helps to push the cartoonist to work out short cuts, better ways of doing things, faster ways of achieving the same results, but at the back of the mind, "You're only as good as your last piece of work" is a constant spur to do the absolute best you can, every time.

So. although comics look easy, they are hard work. It's a fantastic, wonderful, amazing, exhilarating, funny, absorbing, perfect job, but it is an actual, real job! Far too many young cartoonists and wannabe cartoonists, drawing alone in their room for an hour or two at night, think they've cracked it, they can draw cartoons.  Nice try, but that's only the beginning. It's only the start of the beginning of the beginning. Can you draw a cartoon? Fine. Can you do another one tomorrow? And tomorrow? And every day, with luck. I don't think a single day has passed since I started in October 1980 that I haven't learned how to do something new, or better, or faster. After 30,000 pages, I still hope my next page will be better than any of the preceding ones.
Which reminds me, there's work to be done!