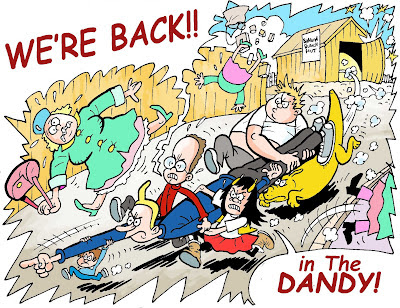 I finally found something I wanted to do, it's The Banana Bunch!  We did a couple recently for the 2013 Dandy annual and it seemed that it went well- so here they come in the weekly in all-new widescreen full colour adventures! You won't know quite what to expect next- I didn't, and I wtite 'em, too!  So, don't walk, RUN to your nearest stockist and have a look. Or preferrably buy a copy! It's what Wednesdays are for!
Posted by NP at 21:07 3 comments 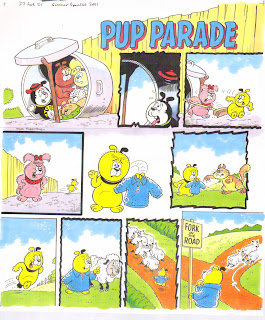 I've been drawing Pup parade in the Beano recently. I was told they'd need four or perhaps six. I'll be drawing the tenth one tomorrow. But in fact it's more like the twelfth one, because I'd drawn one for the Beano annual a couple of years ago and I was astonished to (re)discover that I'd also done one back in 2001 for the Beano or Bash Street Kids Summer Special (can't remember EVERYTHING!) How about that! 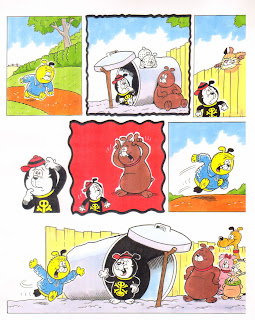 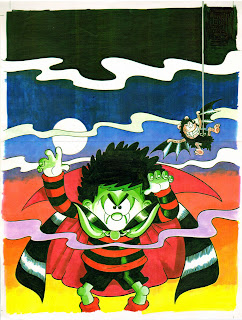 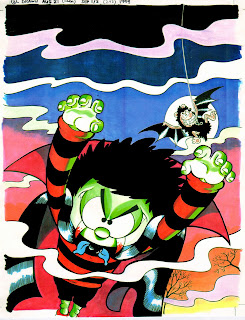 I promised a while back to take a look at some Beano covers of the Past that I'd redrawn because I hadn't been satisfied with my first attempt. So here goes, right back to the beginning, with my second-ever Beano cover! It's for the Halloween 1999 issue, and I drew it on August21st that year. But then I wasn't sure it was spooky enough so I drew a more dramatically angled one, here on the right. I couldn't decide which was best, so I sent them both in (no email then, it was Royal Mail!) and waited to see which one they'd choose. Duncan Leith phoned me to say they'd decided on the second one which they appreciated very much and thought very dramatic. The tone of his voice led me to think that if I was ever asked to do another Beano cover, maybe I should try and make that as dramatic as possible too. But would I be asked to do a third cover? Time would tell.
Posted by NP at 23:19 3 comments 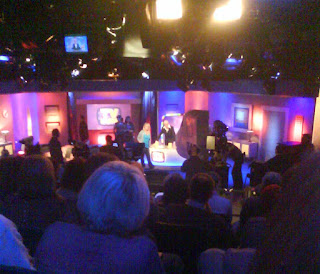 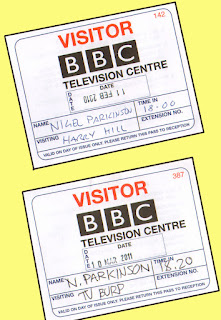 I find it hard to believe that the BBC have decided to sell it's famous television centre at White City West London. From it's opening in 1960 till now, it has seen virtually every star of TV walk through it's doors. As the first purpose-built TV studio in the world, it lived and breathed it's history and with every visit I did so too.
These two passes are quite recent, two of the many visits I made to TV centre to watch TV Burp being taped and hang out with Harry Hill afterwards in the Green Room. On Feb 11 2010, we spoke about the proposed Harry Hill strip and I introduced Harry to my brother Dave and his family. On March 10 2011 Harry told me how delighted he'd been with the Dandy strip, and insisted on informing everyone that they should read the Dandy too.
Yes, a lot of history.
Posted by NP at 23:08 2 comments 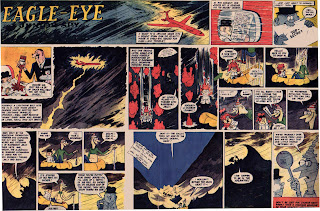 Here's one of my very favourite Leo Baxendale pages, a double page spread from an early issue of WHAM! in late 1964, which he also wrote and hand-coloured himself.
I have a L A R G E print of this on the wall at home, it both cheers me up, showing me what CAN be done in comics, and puts me in my place, reminding me I can never better it!

No-one guessed before The Dandy gave it away- YES! The Banana Bunch are back! Starting in June, The Dandy becomes 'The Banana Weekly' or something (let's see how fast that joke becomes a rumour!!) with the re-introduction of the Banana Bunch, erstwhile Beezer mainstay and very occasional Dandy feature, as drawn by me, and now written by me, my first such Dandy strip since those old days of Harry Hill, so long ago. Colours by Nika. Let's see how it goes!
Posted by NP at 08:27 6 comments 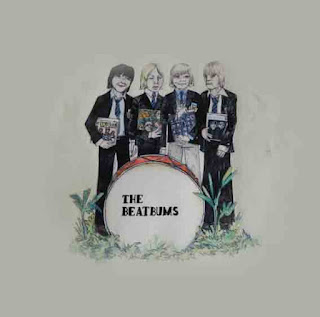 Before the Rutles, there was another Beatles parody thing going on- (and before National Lampoon as well, dear American readers!) and it was The Beat bums, the Junior Crap Beatles! Yes, here they are, all lined up on a 'White album/Sgt Pepper' hybrid fake LP sleeve I drew back in about 1974. It was an amusing project, we changed the lyrics to well-known Beatles songs and, before the whole thing fizzled out, made a handful of LP sleeves, all full-size and laminated and so on. The lads were all real school friends- and very sadly the one on the left, Jeff Bowen, died suddenly this week, only 49. He must have remembered these days quite fondly because I'd completely forgotten it and it's thanks to his widow Alison and his cousin Derek that we're able to see it again.
Posted by NP at 08:53 7 comments 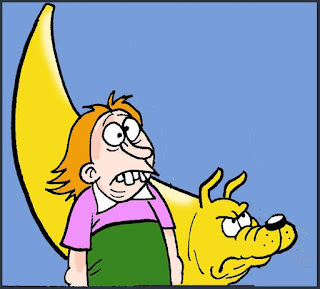 Here's more. Who could it be? Where might they be heading? Honest, I'll reveal all next week unless some bright toffee-hungry bladdict wants to have a guess...
Posted by NP at 20:47 11 comments

It's that time of year again! 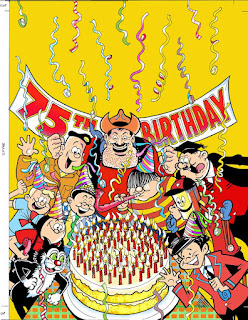 I recently did this cover for the 2013 Dandy annual, which, as you can see, celebrates 75 years of this (generally) weekly comic. I'll show you the back cover nearer the time of publication. Can anyone name all the characters in the illustration? (Nice colours done by Nika)

I've drawn quite a few pages inside, too , including Cuddles and Dimples and my favourite, Owen Goal.
Posted by NP at 23:30 9 comments 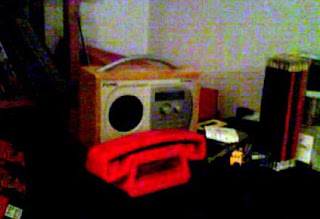 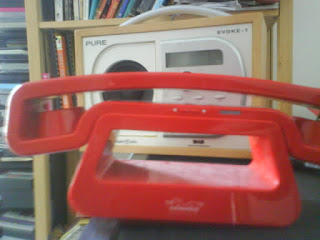 Here, at long last, is a picture of my new phone- it's that red thing in front of my radio. I chose it for several reasons, the most decisive of which was it's friendly 'marimbas' ringtone. And of course, it's startlingly cheery colour. 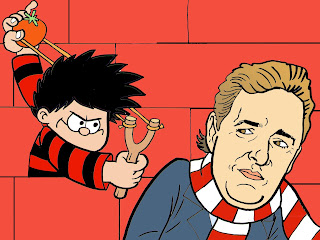 Just thought you might like to see it. Do it, Dennis, he deserves it!
Posted by NP at 17:32 2 comments 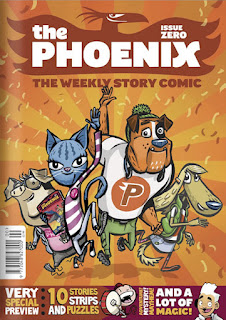 I've tried. I went to the website and tried to set up a subscription. It took me round and round in circles till it decided I wasn't worth bothering with. It doesn't like my address which it asks me to insert even though I've inserted it. I emailled the help team a total of four times and have not yet recieved even a reply let alone any help (mind you, it's early days, it was only six months ago maybe I should hang on a little longer), I emailled the editor and of course got no reply. I have tried telephoning and it has not, up to this morning, even been answered.

But of course you don't need to go online, everyone keeps saying it's so easy to buy in the shops. Waitrose only, but still, there is one a mere two buses one train, a long walk and a further bus away from here, so I went to my "local"  Waitrose and, not seeing it on the shelf, asked. After asking several people, I finally spoke to the store manager who told me it was only available online, not in stores. Of course I told them that apparently it was available instore. They were surprised but promised to stock it if they could. I've tried that particular store again since, a month later- no, still not on the shelf - and, subsequently, ten other stores (mainly in London) and counting. One had four or five different issues, which I bought, the other nine - nine - had never heard of it. It says on the Phoenix website that if a Waitrose store doesn't stock it, tweet them and they'll sort it out. So if you don't do twitter, like me, you can . . .?

But then there are our independent comic shops! They will definitely stock it. I'll save your time here; no, most of them don't. I understand GOSH stock it, but at 203 miles distant from here it's a bit of a trek. Even more than my nearest Waitrose.

I've read those five issues I eventually got. I'd like to tell you it looks good and is printed well and is a good mix of interesting things. But the sour taste of the fuitless hours of searching for it has kind of muted any enthusiasm I may have.

So I'm at a bit of a loss. I'd like to subscribe, I really would. Some cartoonists and illustrators I like and others I consider pals have got work published in it, so I understand. But the Phoenix is simply not available for me. They don't want my money.

In case you'd like to try it, HERE is a link for you to attempt to subscribe.

Update: Having been to and asked in 3 Waitrose stores in Hampshire/ Dorset , I can add another 3 Waitrose stores that don't sell Phoenix.  And I telephoned the 'help'desk at Phoenix and was put on hold for five minutes. And wasn't helped. Well, good luck to them.
Posted by NP at 10:11 9 comments