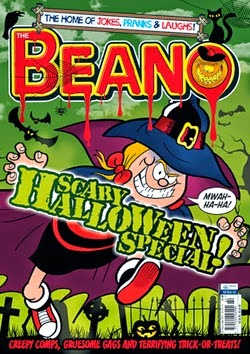 Halloween is split into two parts this year! First half is in this week's ghoulishly great BEANO (on sale now!) and the second half is in NEXT week's equally fantastic BEANO! For only the second time in her 60 year career, Minnie The Minx is the cover star, ousting that spikey haired menace, Dennis. Still, I don't mind, I draw them both. Happy Halloween!
Posted by NP at 19:55 0 comments

Stories of the Past

Today's date reminds me of something.


Thirty four years ago this very day I decided to take charge of my 'career', which had been going nowhere in a rather dispiriting way for a couple of years. In summer 1979 I'd even taken a local government job, and ended up in August 1980 as head of a department! I was looking at the prospect of a long career in the County council, and even a pension. Either that or get out and do what I wanted to do.


Luckily, my department was merged with two others, and I was offered either redundancy or a three year contract. They must have thought I was crazy, taking the redundancy! It was the magnificent sum of £300 (even in 1980, that was like, nothing,) but I also got my superannuation back, and that amounted to another £300. Now, with £600, I had an idea! I arranged to go to Paris!


It was August 15th 1980, and I remember standing in the Dover Hovercraft Departure Bay reading a newspaper account of John Lennon being seen coming out of a New York recording Studio and him admitting he was working on a new LP- his first for five years. Exciting news of the 39 year old reclusive former Beatle.  My friend and I (I thought she was my friend, turned out years later she really wasn't. Enemy might be a truer description. Another story) enjoyed spending time in Paris, living in the Greek quarter, making my £600 last longer than seems feasible. You've seen The Rebel, that's basically what it was like, except I was a 6' 1", 11 stone 20 year old with lots of hair (yes, I was shorter then. Am taller now. Yet another story!)


So, it's now October 13th 1980, and I'm back home, wondering what to do, penniless and with no job. Only one answer- Get into Comics. So, I sat down with six big big sheets of Bristol board (actually 'fake' Bristol board- I was skint) and began drawing. My trip to Paris seemed to have energized me and I turned out some good stuff (relatively). On October 16th, I would bundle up three of the sheets, stuff them into a postal tube and address it to Bob Paynter at IPC, and the other three sheets to Bill Stirton at DC Thomson.
Who knew what the future might bring?
Posted by NP at 11:15 2 comments