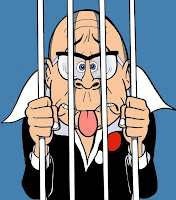 Your weekly Dandy is out in 36 hours or so, with the usual unusual mix of stuff.
Harry Hill is there, but look, he's behind bars for some reason!


The Dandy remains the best £1.50 worth in comics and deserves your full attention.

Am I a Diddyman? 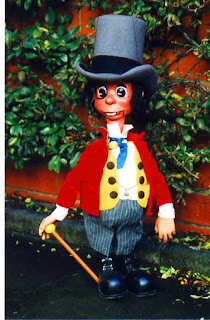 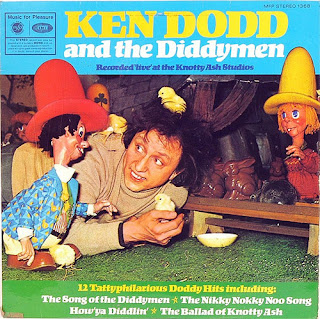 In 1965, the biggest star in Britain was Ken Dodd. No, really. He'd been selling out seaside pavilions for some years, and had been a radio star for a while, but by 1965 he'd became a bona fide TV star and, more unlikely, a Number One chart star! Yes, in the same year The Beatles, The Rolling Stones, The Kinks, The Hollies, The Beach Boys, Sandie Shaw, The Byrds and Manfred Mann were No 1!
In that year he introduced something specially for the children - The Diddymen, a team of Leprachaun-like puppets who worked in the fictional "Jam Butty mines" of Knotty Ash (a real district of Liverpool, Dodd's home town, and, indeed mine.) They were designed by John Geering, who went on to be D C Thomson's Bananaman star artist.

Ken Dodd's saturday tea-time TV show had a spot where kids sent in drawings or poems or jokes to be featured. Yes, LIVE on BBC 1! In either late 1965 or early 1966, I made my TV debut by proxy with a drawing of a proposed new Diddyman character and had my name & address read out. Some time later a new Diddyman appeared - I wonder if it was Nigel Ponsonby-Smythe (above), because that would be sort of neat, wouldn't it?
Posted by NP at 21:26 1 comments 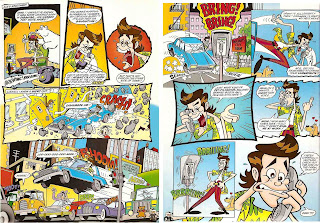 Audrey Wong at Fleetway brought me back into comics in 1996 to draw Ace Ventura, Pet Detective (a tie-in with the animated TV series). It was a very pleasant time for me, and looking back on these pages, they're not too bad!
Posted by NP at 08:02 3 comments 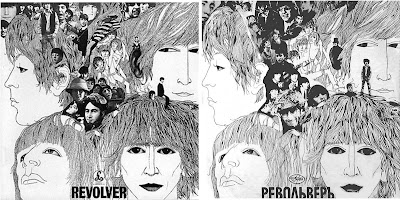 On the left, the album everyone knows, Revolver, as issued in 1966 on the Parlophone EMI label. Wasn't it a good one?

Over in the Soviet Union in 1966, there were no Beatles records- that sort of thing was discouraged by the government. For "discouraged" read "outlawed". When Revolver was eventually released in the then-U.S.S.R on LP in 1979, it rather confusingly had a few different songs on it, and more puzzlingly, a different cover. At first glance it looks the same, but the montage of photos is different- and, curiously, the drawing itself is different! Very close, but not the same! Anyway, I'm always glad to see an illustrator get more work, so I'm OK with it.

In the end, the Revolver we all knew in our street was released in the former U.S.S.R on CD with all the right songs and the right cover! Hoorah, a victory for huge Multinationals AND art, music and illustration. Now we can sleep peacefully again.
Posted by NP at 20:39 0 comments

Some things change, some things don't change. Different shirt but same colour, different dog, but same breed. That's me in 1970 and me in 2005 with Rex. Funny how you can go 35 years between photo opportunities to find nothing's really changed at all. 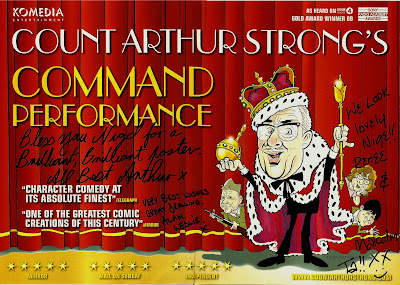 Last evening some of us went over to see Count Arthur Strong make this poster come to life, in one of his biggest gigs ever. A laughter-wracked time was enjoyed by all. He and his co-stars all kindly autographed my poster, and The Count even hinted he may be back on our TV screens before long if all goes to plan. And I can reveal EXCLUSIVELY here that there WILL be a new 6 part Radio series at Christmas, recording begins in October! And it's FREE! Come along, it's 100% hilarious!
Posted by NP at 20:02 0 comments 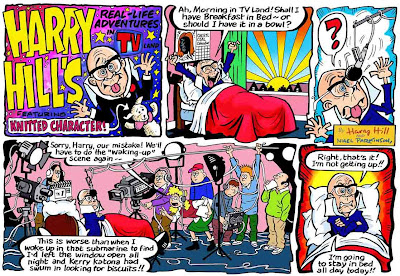 This week's comics are out within hours! Exciting, eh? The Dandy has BANANAMAN on the cover! Hooray! And the Harry Hill strip is one that I was particularly pleased with when I drew it back in the dim dark past of last summer! Nice colours by Nika too. If you've never bought a Dandy before or not bought a 'new' Dandy yet, do yourself a BIG favour and grab one this week! And while you're there, get the Beano too, it's also great!
Posted by NP at 11:16 4 comments

DENNIS the MENACE is 60 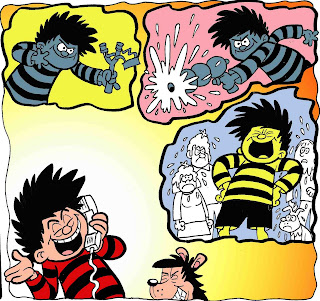 Today, Thursday 17 March, is the official birthday of His Most Menacing, Dennis. If you're reading this in America, no, not THAT one, the real one, our Dennis, the Beano one! (although, funnily enough...) 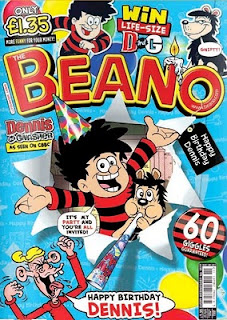 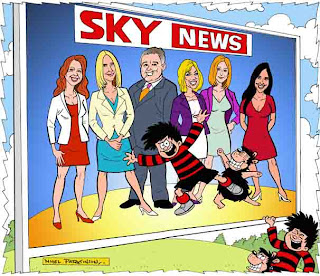 There are plenty of celebrations! The new Beano is stuffed full of pages from the past by the remarkable Davey Law and David Sutherland, and Dennis has been menacing on Sky News and in newspapers, and will be  most thoroughly menacing on BBC Scotland TV tonight.
And on Thursday morning (today!) just after 10 am I'll be on Radio Merseyside talking about the stripey one. That's DENNIS the MENACE to you and I, and by the way, HAPPY BIRTHDAY!! 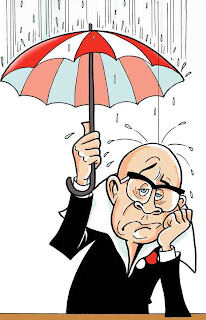 Yes, tomorrow is Dandy day again, and a great issue, in my unbiased, non partisan opinion. The design department have come up with a groovy cover, and the printer has kindly provided both glue AND staples this week! Whatever next!
Anyhow, THE DANDY is the best £1.50 worth since last week, and you are taking a serious risk with the health of your sense of humour if you don't buy one*. Or two, just to make sure! 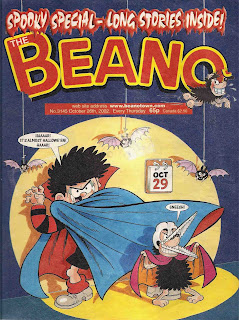 This Beano from October 25th 2002 (left) was my attempt at a homage to the likes of Dick Sprang and Bob Kane and Jerry Robinson, as it's a re-creation of a famous 1940 BATMAN cover of Batman and Robin in a searchlight. But interestingly, it was my second attempt at a cover for this Halloween issue - I had initially drawn this (below) rather eerie picture with spooky smoke and devilish glow but I sort of self-censored myself and thought it was too ghoulish! So, without submitting it, I started again and did the Batman pastiche. 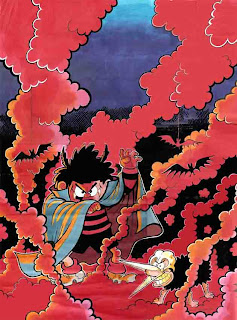 This wan't the first time I'd gone to the trouble of re-drawing something. At least two other Beano covers were drawn more than once (one was another Halloween cover from the year before, and another was Dennis as a judge which I drew from THREE different angles!) They exist as full complete cover illustrations, hand-coloured by me. No idea what to do with them.
Posted by NP at 20:31 8 comments

The Beano on TV 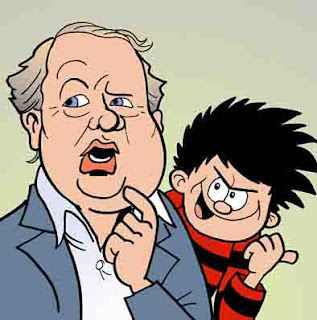 The 'One' show on BBC 1 this Friday night (7pm I believe) features John Sergeant meeting the striped Menace on the eve of his 60th birthday (Dennis's, not John's!) and in support of Comic Relief. I drew some commemorations of this event, as you can see here. There may be more possibly on the 'One' Show. There you will meet the new editor of the Beano, Michael Stirling, or 'Sir' as he is known to us lackeys. Three cheers!
Posted by NP at 22:59 3 comments