Revealed: Secret of The Pencil! 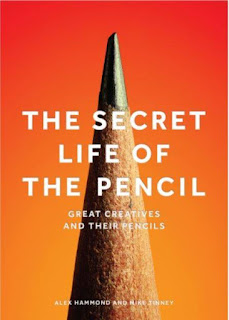 The Secret Life of The Pencil was published last week- a hardbound book of super-close-up photos of PENCILS! Not any old pencils though, these belong to artists, photographers, architects, designers, writers, why there's even a cartoonist or two. (Yes, I am in it, on the same spread as Peter Blake!) Most of those included you will have heard of; Gerald Scarfe, Paul Smith, William Boyd, Anish Kapoor, David Bailey, Tracey Emin and so on. And there are brief interviews and doodles and stuff. Who would have thought huge blow-ups of pencil tips could be a) so intriguing and b) all look so different!
These photos were in an exhibition in London a couple of years ago, and seeing my little pencil at the GIGANTIC size of 3 foot by 2 foot in the foyer was quite something!
Posted by NP at 09:53 0 comments 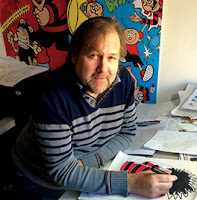 It's Saturday, 4 November, and I'm at the Blackburn Comic Con! But it's just me this time, Nika can't go because of a reason.
Anyway, come and see me, get a free badge, this is my final Comic Con of 2017! 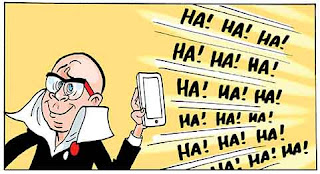 Colourists I Have Known 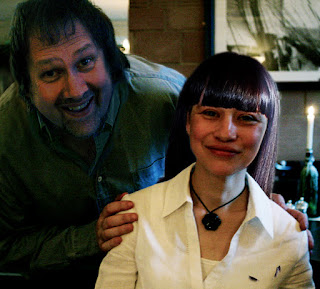 Although Nika has been my colourist since 2005, sometimes she wasn't always available. In 2007/9 she had a real job in Greece so I had to find other colourists. In 2006/7 Ruth did the job (and once in a while after that too, including a busy weekend in Leeds in 2013 doing a BBC event) and then she went and got a real job. So, in 2008, I was lucky enough to have Caroline here offer to colour for me. Oddly enough, she'd never coloured before, but was prepared to learn. And she did! She also had a real job too! She would come in to work for me after work and on her day off. Dedication or what. A lot of Cuddles and Dimples in Dandy Xtreme and Dennis The Menace and Lord Snooty III in The Beano were by her. Anyway, after a couple of years, she got another job that required commuting so I had to look for yet another colourist. Luckily, by then Nika had given up her job in Greece and had started colouring with Photoshop so she gladly became my full time colourist again, which she is today of course.
Caroline did a good job and not only that but in June 2009 she organized my 50th birthday do at which I introduced some friends to my Long Lost brother. So it was an interesting time.
Posted by NP at 22:22 0 comments 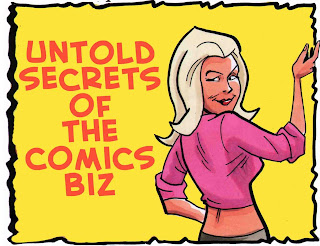 I haven't always been a successful cartoonist. Believe it or not, 35 years ago in the summer of 1982, I was anything but. They say success is built on skill, ability, talent or hard work. And maybe it is, but in my experience, there's also 'luck'.

Between autumn 1980 and spring 1982 I had managed to finally get a few jobs drawing comics. But I was losing more jobs than I was gaining. With a friend (I thought she was a friend but turned out she wasn't) I had begun to look for other illustration jobs. We eventually got some work with a TV station, and one or two other bits of commissions. I had nearly given up on being a comics cartoonist, I was starting to feel left behind. But we set out on a hot day in July 1982 to a final big push around publishers in London. We had our portfolio cases with us and struck out with the Writers and Artists Yearbook to visit all the publishers who would see us.


Well I won't bore you with the sad tale of our reception at these places. We ended up at 2 O'clock in the afternoon in a tatty, deserted pub in Chalk Farm downing two pints of lager. It was a very dispiriting afternoon. We were just wondering whether we ought to try some more publishers or get the train home when the door burst open, and what I vividly recall as a whirlwind of colour and cheerful shouting charged in. On closer inspection, it was five young women with instrument cases, gloriously mad hair and bright outfits.

After a while, two of the girls came over to us and asked what we had in our portfolios? "Are you dress designers?" asked one "I'm always looking for new ideas!" We said we weren't, we didn't know what we'd be in the morning, but up until now we'd fancied ourselves as Comic cartoonists. "Let's have a look then!" another of them demanded.

We reluctantly opened our cases, explaining that we were out of luck looking for work. "Maybe because we're not very good" I offered. "Don't say that!" said one of the girls, a very tall one who reminded me of a really young Penelope Keith in her poised precise speech, "I shall inform you if you're any good!" She had a good look at my stuff and looked at me very deliberately (I later found out she was very short sighted and that was why she fixed you with a look!) and, pointing at one page, said "this is as good as any cartoon I've ever seen, matey! Don't you dare give up, if you do I'll have to come looking for you!"

Around this point, my "friend" realized who these women were- we had both seen them on Top of The Pops the week before, in fact; they were five of The Belle Stars, and my new booster was sax player Miranda Joyce, who we'd seen singing their hit record, 'The Clapping Song'!

We all chatted for another hour or so, and promised to come and see the band play, and all of the Belle Stars were very charming and pleasant company, but for most of that time, Miranda and I spoke, mainly trivial nonsense about nothing, but I felt so buoyed and confident that a glamorous and fascinating stranger had offered me such unqualified encouragement and support that I felt I'd met someone very special indeed. 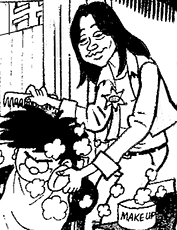 When I got back to Liverpool, that short afternoon had somehow changed my attitude. Permanently, as it turned out. I've been relentlessly positive and optimistic ever since. I'd never met a young, successful, artistic Londoner before; in the North our most upbeat catchphrase was 'it's not too bad'. Generally, things were a bit downbeat, especially in the unhappy, downtrodden Liverpool of the early 80s. Miranda's cheerful confident positivity was contagious and I determined to get more work and strive to be a success. I even put Miranda in a Beano comic when she later became a famous make up artist as a sort of secret thank you! 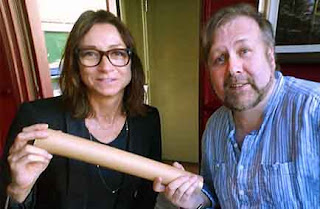 I mentioned this incident to Miranda many years later (see photo!) true to form, she didn't recall it at all, but was glad she'd made such a difference to me.
Lucky day for me.
Posted by NP at 22:13 7 comments

We're only doing a few Comic Cons this year for reasons which we cannot divulge, and these are the next three:

12 August  BLACKPOOL
23, 24 September  LEEDS Thought Bubble
4 November    BLACKBURN
If you've ever thought you'd like to come and say hello or have a bespoke drawing by me and Nika or slink past anonymously then I strongly advise you to make one of these events, don't wait for 'next time'. 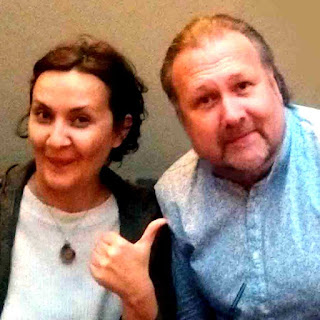 The Beano has, in recent years, favoured longer stories and more frames per page. I've drawn 21 panels on one page in 2017 already. But sometimes the page isn't quite enough to fit everything in, and this week's BEANO (out today!) has a good example, where a caption box and word balloons were pasted over a particularly nice atmospheric bit of drawing by me and colouring by Nika. So, here it is, me channelling Joe Maneely! 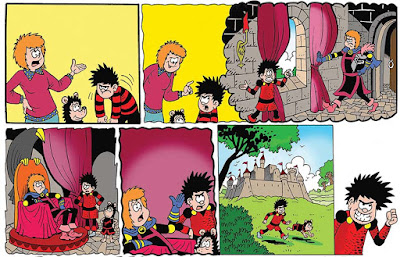 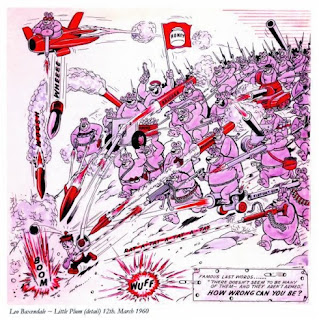 The first name I recognised in comics was Leo Baxendale, who signed his name on the front cover of WHAM! In 1964 introducing me to the astonishing fact that comics were actually drawn by real people.
Until Sunday, he was still my favourite living cartoonist. 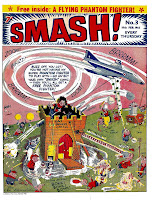 He was adept at drawing detailed swarming crowd scenes just as much as close-ups of fear, greed, horror, joy or loathing-ridden faces and everything in between. No one could draw comics like Bax. And it seems odd to say it in the past tense, even though his last major published periodical work was in The Guardian in the 1990s.


In the 1950s he gave us Little Plum, Minnie the Minx, The Bash Street Kids and The Banana Bunch, still amongst the very top drawer of comic creations, two of them have been continually produced every week in The Beano and probably always will be.

Leo was a larger than life character (the stories of his brief reign as king of comics at the Beano are legion, exciting and possibly true) and his self-taught tremendous energy and vitality made all his strips as hilarious as anything ever published. To this very (sad) day, he’s the only comic artist to have made me laugh out loud. I have only three pictures on my walls. One is a print from 1966 by Leo, the others are original art-size prints of pages from WHAM! that Leo coloured by hand.


In WHAM! And SMASH! He introduced possibly his greatest and funniest character, the slimily evil Grimly Feendish and the one picture he did that inspired and thrilled me beyond everything was his cover of Bad Penny on SMASH! Number 3. I kept that comic with me every day from February 1966 until now, the only comic I ever salvaged from my mum’s eternal spring cleaning drives. In 1994 I was able to tell Leo himself. He said he remembered being very pleased with the way it turned out.


Leo ought quite rightly to be pleased with the way everything he drew turned out.
There'll never be another.


Even if you haven't knowingly seen any of Leo's work, you have seen the work of those of us directly inspired by him, like David Sutherland, Mike Lacey, Ron Spencer, Martin Baxendale (no surprise there!) Tom Paterson, Steve Bell, Lew Stringer, me (of course!) to name only a very few.

On the Road AGAIN 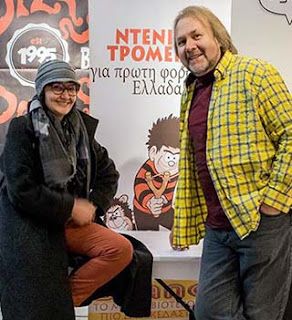 Me and Nika are on our travels again this year, visiting Comic Cons where you can get a free badge or comic and see us drawing!

4 November    BLACKBURN
We may have some others to announce over the summer and into autumn, we're still deciding!
One show we WON'T be doing, as usual is the MCM Comic Con in Liverpool on 12/13 March, so anyone expecting us to be there, we won't be! 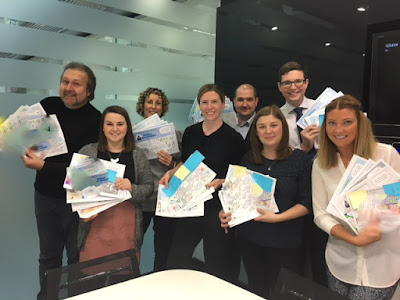 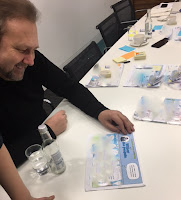 Yesterday (Tuesday) I had the considerable pleasure of attending to the tricky problem of helping to select the winners in a country-wide cartoon competition for British Gas, in a top secret London location (it was near the pub). I can't tell all the details yet but I can inform you we all worked hard (especially Sinead!) and were very impressed by the entrants. Anyway, stay tuned for the big news soon!