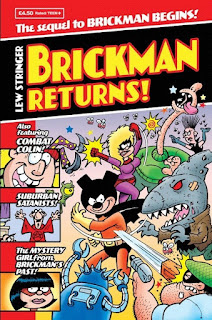 A very funny comic book of Brickman strips is available now, right up your street if you know your Marvel Comics of the 60s, or The Cloak, or Combat Colin, and especially of course, Batman! Created by comics stalwart Lew Stringer, Brickman Returns is the usual crazy, hilarious and satirically knowing superhero antics, but funnier, crazier and wilder than ever- and all in colour too!
There are several bonus features, all hard to find or unpublished in Britain before, so it's a cracking good read all round!
And, fear not, Belfast and Newcastle comics fans, Nika and I will have a little stash of copies available to buy at our stands at the Comic Cons in October/November! Save on postage!


But, if you just simply cannot wait, you can visit Lew Stringer's Online Store now
Posted by NP at 18:09 0 comments 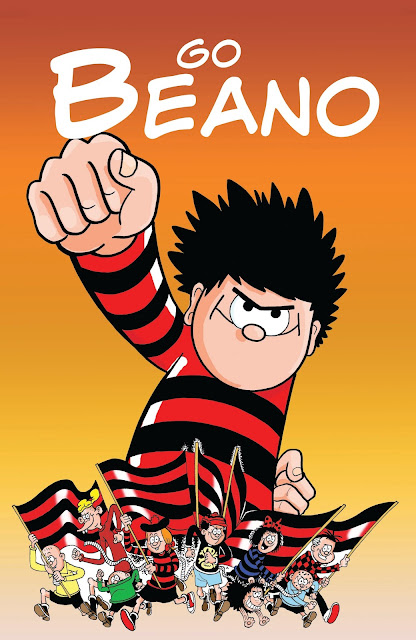 Exciting times ahead for The Beano.
I wish I could say more but I just can't.
No, really.
Posted by NP at 19:22 5 comments

One Saturday in Birmingham 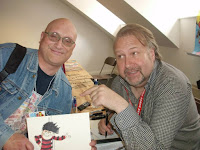 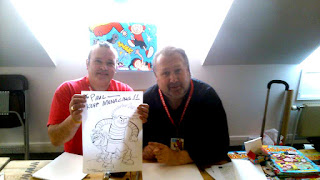 On Saturday me and Nika made an appearance at the ICE Comic Con there- nice to see fellow pros aplenty there- Lew, Hunt, Dave and all those other 2000AD guys-
again, we were all finished early, everything given away! Here I am with Beano fans of a certain age who seemed pleased with these quick sketches we provided on the spot! (Eagle eyed readers may spot I'm wearing different shirt at 11am than I am at 2pm. There's a story behind that!)
Phew!
Next event in October- The Lakes Festival.
Posted by NP at 19:08 1 comments 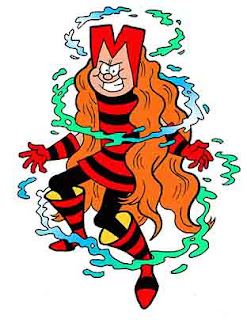 We don't always draw the characters the way we normally do- sometimes there's a special feature that needs a different look, a new approach or a radical redesign. Here are all three in this Minnie The Minx from 2011, represented here in case anyone didn't see it but would hate to have missed it. Would make a nice T shirt!
Posted by NP at 22:30 0 comments

Oh Dear- Look Who's Back 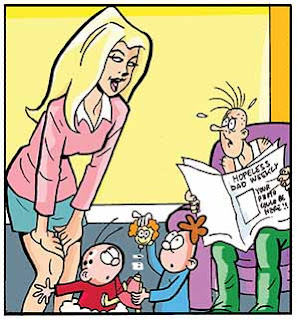 I'm afraid it's true, fresh from my drawing board and Nika's colouring tablet comes this worrying evidence that the story of those terrifyingly awful toddlers Cuddles and Dimples is not yet over. Another phase is due for publication sometime... somewhere... just don't say you weren't warned... they're still around!
Posted by NP at 22:13 4 comments 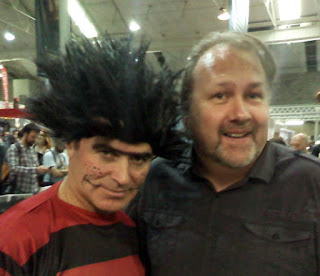 ...of meeting Beano readers old and new and maybe converting a few who don't read it, me and Beano Colourist Nika are following up our hectic day at the MCM Dublin Con with a day at ICE in Birmingham.

In Dublin, thanks to Bryan, things went better than expected, and by the time we got to 3 O'Clock on the first day, we'd given away everything we had and drawn 60 unique pictures of Dennis, Minnie, Gnasher and assorted other Beano characters! 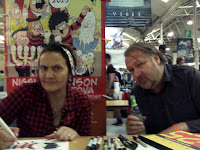 Quite an experience. Although we weren't publicized, and therefore nobody attending the convention knew we would be there, we drew a big crowd and met many friendly types of all ages- I estimate the youngest was 4 and the oldest 80- and several extremely excited, moved, thrilled, happy, amused people. I even had a phone conversation with one boy who was delighted to be speaking to a Beano cartoonist. 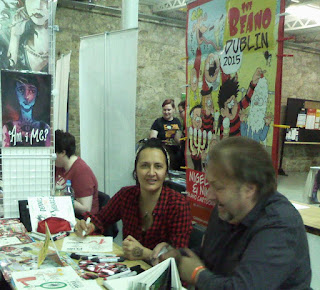 Modesty forbids me mentioning some of the words uttered by a few fans but let me assure you, we found out that Dublin has a lot of Beano readers who keep a very close eye on the comic and know who does what.

So, thanks everyone who came along, and hope to see you again another time.

Next weekend (September 5th) we'll be in Birmingham. Come and say hello!