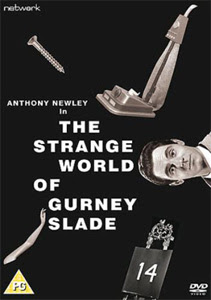 We old-TV-show enthusiasts often came across the name- The Strange World of Gurney Slade- and heard it spoken of in reverent tones. Described as 'Alice in Wonderland meets The Prisoner' or 'Thurber meets Billy Liar', it sounded too good to be true. The fact that it was last shown in it's one and only repeat run in 1963 only added to it's mystique.
Then in 1992, Frank Muir kindly let us see the first episode. It didn't disappoint! Now, 51 years after it's debut, here it is, complete! And the praise heaped on it was entirely justified. It's both a template and dismantling of British TV of the forthcoming decade, and a fascinating attempt at creating something that could only work on television.
Written by soon-to-be Morecambe and Wise writers Sid Green and Dick Hills and created by and starring Anthony Newley and a cast of dozens that burgeons from week to week, it's sharp, satirical, thoughtful and, yes, funny, and would have worked perfectly in 1967 once everyone else had caught up!
Watch a trailer for the new DVD of it here
Newley wasn't too dismayed by Gurney Slade's lack of success (critics on the whole loved it, but viewers on the whole hated it!)  as he teamed up with another writer to do a sort of stage musical of the same kind of idea with Stop the World, I Want to Get Off in 1963, which introduced his most famous and enduring song, What Kind of Fool Am I?
Network have just issued this DVD, just another in the long line of titles they have brought out of hibernation., and as usual, a nice booklet and superb packaging.  There's no other DVD company that does such a good job.
Posted by NP at 06:57

I remember videotaping the first episode when it was shown back in the '90s - I should still have it. You're right - Network do an excellent job. I have several of their collections. I heard this one being reviewed on Radio 4 recently, so I might buy it when I have a little spare cash. (I want to buy THE BOUNDER first.)

Network did a great job on an old movie with Leo McKern called 'The Day The Earth Caught Fire', which, while it's no 'Fail Safe' was uncommonly nerve-wracking for it's day!