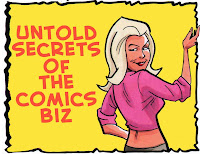 Every comic book cartoonist has to start somewhere.
That seems obvious but let me explain.
The printed or online comic page you read didn't start out as a finished page of artwork, or as a script, or an idea, or even a blank page- it started many years previously when some kid first saw someone else's comic page and thought "this looks like the job for me!" 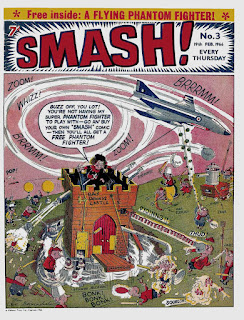 For me, it began in 1962.
Everyone has a mum and a dad, and in 1962 I was lucky enough to be living with them. My mum was (is still, in 2016!) the sort of person who likes to have a tidy house and thinks any printed matter older than about two months that isn't a book is by definition trash. This caused many a sticky moment in the 1962-1974 era where my comics hiding places were discovered and consigned to the garbage. One particular event that stands out was in 1973 when I managed to salvage ten issues of Smash! from summer 1966 that I'd until then hidden successful in the shed literally as they were being handed over to the dustman. But they were unique, really. Of all the comics I bought (or had bought for me) in the Sixties, apart from those few Smash! comics, I only managed to keep three. Three (3). Yes, you read that right, not 3,000, not 300, just 3. One was a TV21 from August 1966, one was a POW! from early 1968 and one was Smash! no.3 which I practically carried with me everywhere from the day I got it in early 1966. I still have it (tattered and torn and trimmed though it is) and two more pristine copies. It's the comic I'm always trying to surpass.

My dad though, was a born browser. He'd have loved the internet and cable TV. He loved magazines, newspapers, books... he read voraciously and indiscriminately. I'm just like him. He introduced me to periodical publishing. At Christmas time 1962 I was reading my Jack and Jill nursery comic and he pointed out something that would change my life. "See where it says "December 29th 1962" on the cover? Next week it will say 1963!" Wow! You mean, there will be another one next week? And... hold on... does that mean... CAN that mean... ANOTHER one the week after? And... wait... gasp... one EVERY WEEK???! That was the moment I wanted a comic every week. It would lead me, 18 months later, to discover a new comic- "WHAM!", which I immediately graduated to, and which eventually led to SMASH!. I would have collected it every week and saved it if it had been possible.
But, as I had my comics chucked away all the time, I took to drawing my own. It was more a matter of trying to recreate what I'd recently enjoyed rather than do my own thing. It took me until 1966 before I realized I could draw new stuff. I could create something no-one else had read. Something that was mine! Of course, being paper, these were all thrown away too. I have 5 drawings of mine from before 1971.


My Dennis The Menace in this week's Beano didn't start when you read it. It didn't start when I drew it, or when Nigel Auchterlounie wrote the script, or when I started drawing Dennis in 1997 or when I started in comics in 1980, it all really began for me in 1962. A few years ago, at the one Comic Con I was a guest at before 2015, I was greeted by a DC Thomson editor who told a fan "Here's the man who will draw you a sketch of Dennis!" I took the paper, and a pen, and, still standing up, drew a 10 second picture of Dennis. The editor said "If it only takes you 10 seconds to draw Dennis, we're paying you too much!" To which I replied "You're paying me for the 40 years of drawing that led up to me being able to do it in 10 seconds!" I don't see drawing comics as a week by week thing- I started drawing in 1962 and I'm still drawing now. It's all one big project.


Everyone who draws comics began somewhere. And they began by emulating or recreating or restyling the comics they were reading. So it began for me on Christmas Day 1962 (Best present: Hanna-Barbera Chocolate 3D model characters set; Worst present Hanna-Barbera Chocolate 3D model characters set, half eaten by my sister and rewrapped. Huck, Yogi, Pixie and Dixie and Mr Jinks all standing there, smiling, with no backs to them, just teeth marks.)

I like reading these posts, NP. Looking forward to Part 3. The first thing I remember drawing was a teddy bear. Nothing to do with a comic, it was a photo on the back of a packet of corn flakes. I cut it out and used it as a stencil - until I realised I didn't need it and could draw Ted without the assistance of the cut-out.