I used to use Indian Ink a lot.

But when I started drawing with the intention of getting a job doing so, I used standard cartridge paper and pencils, biros, felt tipped pens, anything to hand. The end results were a bit on the disgraceful side.

What to do? There had to be a reason why I was producing such substandard work? I couldn't really expect to make a living out of that. In 1978 there was no easy way to find out what I was doing wrong. No internet of course, no books in the library about cartooning (more likely to find a book about swimming in the Alps), no Cartooning Clubs (whatever they were). Nobody one knew or was likely to know had any idea either. [Go to Art School? In 1977? I didn't want to be in a Punk Band, I wanted to draw!] So it was down to two things which fortunately I had and still have apparently unlimited resources of: determination and stubbornness. 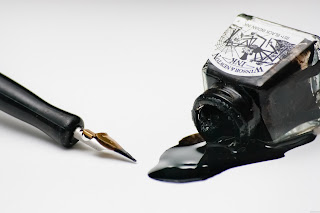 I drew lots of pages, and eventually ended up with a handful that were a notch above diabolical. These were what I took with me when I engineered an actual face to face meeting with Gordon Wesley, Art Director at IPC (Fleetway) in London.

Now, here's a curious thing that may surprise the reader; back in the 1970s I had been given advice by editors and art directors at DCT, IPC, Polystyle and other publishers (add persistence to that list of my 'virtues') to concentrate on 'realistic' or 'adventure' artwork. This was the era of 2000AD and there was a push to train up new artists for that and Star Lord and all the other new boy's papers. So all but one of my samples was of 'space', 'monsters', 'action' stuff. Very detailed and painstaking too, all dot stipple effect, moody lighting and dramatic panel borders. (Think Gene Colan meets Frank Bellamy, but only if both of them forgot how to draw for some reason).

So I'm ushered in to IPC which was at King's Reach tower (recently redeveloped I see) and admire the view from the 14th floor. But what I saw in there was more significant to me- pages of original artwork by published illustrators! The first thing I noticed was of course the SIZE! These were mainly TWICE UP- that is, Four times the size of a printed comic! (I've explained before about the sizing of paper, but I recently read someone else saying "twice up surely means twice the size". It doesn't, that's once up. Up being the word to focus on). Anyway, these pages looked sensational- and they were on CARD! Actually, I found it was called board- and instead of biros, these guys used pen and brush and ink. Well those revelations were all I needed. Gordon Wesley gave me a cheque for my return rail fare (I'll reveal how much that was for at the end!) and two steel nibs, and told me to buy something called Bristol board and use any black drawing ink, like Indian ink. Ah, there's something called drawing ink! OK, now we're cooking with gas!

Back home, I set to with pen, ink and brushes, Bristol Board (or a cheap version I got from a bookshop on Bold Street which cost, like, one tenth the price and was, like, one hundredth as good), and learned how to use the 'tools of the trade'.

I did eventually get work, and later still regular work, drawing comics, and mostly light action or funny stuff, the kind of thing you see on this blog, not the action/adventure style I'd earlier been advised to pursue. And so I used pen and ink right up until 1991. Two reasons led to me abandoning the practice for good. First, in 1988 I met and started working for and then with George Nicholas, the enterprising force of nature behind Scouse Mouse. He was really fast (he did fully painted murals in 4 hours) and he'd found a way of using Magic Markers and fibre tip pens and Pigment liners and Marker paper to produce great results without having to wait for that pesky ink to dry. And, to keep up with him, I started to draw faster and faster- with my dip pen and ink bottle.

Well, by 1991 I was drawing so much, so fast, that I thriftily invested in a large 1 litre bottle of black ink. Windsor and Newton. the one with the happy spider on it. Save money, save time. Good idea?
NO!
It only took a week or so for me to find out why it was the stupidest thing I'd ever done. Used to dipping a pen or brush in a little 14ml bottle, I'd forgotten how BIG the 1 litre one was. My unconscious hand movement knocked the big, big bottle of ink over. 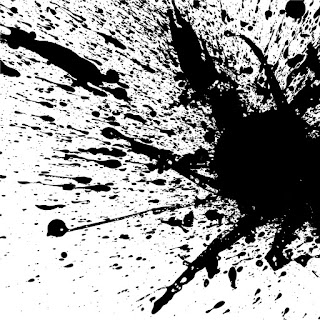 It splattered all over my drawing board. Well, OK, that just adds character, and if there's too much character you can wipe it off. That's not a disaster.

It splattered all over the page I was working on. Well, OK, redraw what you need to, touch up with Process White what you can, that's not a disaster.

It splattered all over the wall. Well, OK, we can get the emulsion out, that's not a disaster.

It splattered all over the carpet. Well, OK, that is bad, but maybe we can have the carpet cleaned or if all else fails put a rug over it. Bad, but that's not a disaster.

It splattered all over a big stack of old, rare, impossible to find comics from the 1960s that I used for inspiration, reference (and occasional light cribbing).

So, I switched from nibs back to pens. And soon I found other pens which suited me even better.

I'm surprised at the return fare to Liverpool being £24. When I travelled down to London from Scotland in the mid-'80s, it was less than that. Of course, maybe you travelled by train (if you said, I missed it) and I travelled by coach, in which case that explains the difference.

Do you know when Doug Church became IPC's art director? He was filling that position when I was freelancing in the mid-'80s onwards. And how badly were your Power Comics damaged by that ink! Photo maybe?

Yes, it was by train. The coach was only £7 but unaccountably took 5 hours while the train was 2hrs 25.
Never heard of Doug Church. I was probably at DCT by then.
Worst casualty, Pow! Smash! Fantastic Summer Special, on top of the pile. The rarest of them all!

I know - I've only got two copies. I'd like a third because I'm into 'threes'. (Nearly said 'threesomes', which is another thing entirely.) I'll make a facsimile of the cover for you, if you wish - no charge. You can wrap it around your copy to conceal the damage. I can send it to The Beano offices for you to collect the next time you're in.

Sadly, the damage was so great that it soaked through about 10 pages and bits are torn and stuck... oh, it's a mess! But thanks anyway!

That's a shame. There are two available on eBay right now at a buy it now price. The first is £52, plus nearly £8 p&p, from America. The other you should nab right now. Only £20, and it comes with 9 other issues of the weekly, from the U.K. Just jump onto the eBay home page and type Fantastic Summer Special into the search box. At that price it's a steal.

Darn it, too late. Don't like the look of the other copy. I'm sure it'll turn up again.