All my life I've had a very accessible memory. That is, I remember things very easily and vividly and can place them in my time line and a general time line. It's not 100%, It's a mild version of "hyperthemesia" and usually it's pleasant enough to be able to recall what was in the charts and in the news the day you had a nice trip to the coast and what comics you bought and what you saw on TV. Mundane or significant, I seem to remember it.

I've mentioned on here and on Facebook and in podcasts and broadcasts and print interviews that I remember my grandfather who had been a draughtsman, a stonemason and a sign painter for the council, showing me for the first time how to hold a pencil and that the first things I drew were cars, vans and buses on a long straight road, which he looked at and said "that's very good" And as he died when I was just 2 and was ill for a few months that this moment must have been when I was no more than 18 months old.

I found the first drawing I ever did. I was 16 months old.

Well, now you can judge for yourself whether he was right to suggest I was very good at that age- on Sunday, I found that first drawing I ever did. And I was 16 months old.

Background to the discovery: My dad loved magazines, newspapers, books, etc. So much so he made his own! He'd cut out photos and jokes and interesting stuff and make a scrapbook with his own drawings. In one book dated 1936 (he would have been 19) there were a few blank pages left and it was on a couple of these I made my first drawing attempt with his and his father-in-laws encouragement. This was in October 1960, in other words, 60 years ago.

My mother was adamant no paper should be kept in the house unless it was a book. Out in the bins went practically every drawing I did in my younger years as it was all on loose paper. My dad unfortunately died while still a youngish man at 46, just before I was 5. My mum did keep three of his scrapbooks. Including this one; by sheer chance although she thew out 99.999% of everything I drew in the 60s and 70s (and I drew every day, all the time,) she had unknowingly accidentally preserved the very first time I ever drew anything.

I opened the book and looked through it a few times marvelling at how tuned-in to the times dad was in the 1930s and what an eye for design and content he had. And it was only on the fourth or fifth flick through that I saw these 'scribbles'. Looking closer it was quite a jolt to see these were not from the 1930s but 1960, and I had done them myself- they were those first drawings on that first day I held my first pencil- and they were exactly as I remembered them.

On page 1, I start with a circle. A few attempts. I was trying to draw a wheel. Then I start to draw a car. It doesn't go well, I lost track of what I wanted to draw so over to page 2 (on the right hand side I went back later that day and added a more acceptable vehicle!) 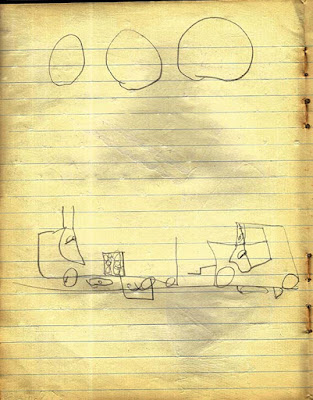 On page 2, I draw a van, bonnet up, spark plugs exposed, starting handle ready. Excited by how easy it seemed, I drew another van, back door open, wheel nuts out on the side of the road, and now with a sign on the side- although I couldn't read or write! I remember doing that and being so pleased it looked like a real sign (with the benefit of hindsight I can accept that was youthful excitement at finding a new skill!) And a little angry driver. The first character I ever drew.
And then a bunch of other characters and bits and pieces. 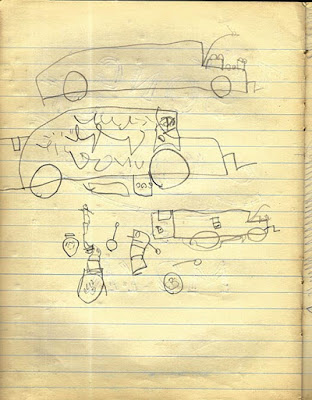 It may not look like much- and it isn't- but there in front of you is the first time I ever drew anything. And I can honestly say there has never been more than a day or so since then that I haven't drawn. 60 years of it.

In 1960, the world was different: Two TV channels, BBC & ITV both black & white); No Marvel Universe- Stan & Jack were six months away from coming up with the Fantastic Four; The Beatles were five kids with slicked back hair learning how to play; A house cost £2,500, a pint of beer (lager not yet invented) about 1shilling and threepence (that's 7p to you).

I had no idea in 1960 I would make a career of drawing but by 1963 I really really thought I would. By coincidence, next month, October 2020 is not only the 60th anniversary of my first drawing, but also the 40th anniversary of me having paid, published cartooning work in comics, in October 1980.
Posted by NP at 14:01

That's incredibly good for 16 months old! That's the standard I was at when I was 6 years old! So by that calculation I should be drawing Dennis and Gnasher in 2025. (Oh, that's not how it works is it?)

I was an early achiever but I stopped progressing in the late 70s. I never got back that youthful enthusiasm until maybe 1996! What I find fascinating about those 1960 drawings is just how fast I progressed and came up with new ideas and approaches, you can almost SEE it happening!

That little figure jumping about looks like a prototype Dalek to me. You created the Daleks, Nigel!

If I didn't know it was October 31st 1960 that I drew it, I would have thought 1961. Either way, it was well before the Daleks so, yeah, I claim those royalties!

They're just the usual scrawls that kids do, nothing good or special about them at all. The strips you draw for Beano are good, but you weren't a child prodigy.

And I'm glad I never said you'd claimed to be a child prodigy. You said we could judge for ourselves whether your childish scrawls were as good as your grandfather thought. They provide not even a hint of the talent displayed in your adult career so I delivered my verdict which is at odds with your grandfather's beaming estimation. You never claimed any of those other things? You could have if you'd raised your ambitions and applied yourself harder. Let that be a lesson to you.

The drawings are recognisable so very good for such a young child.